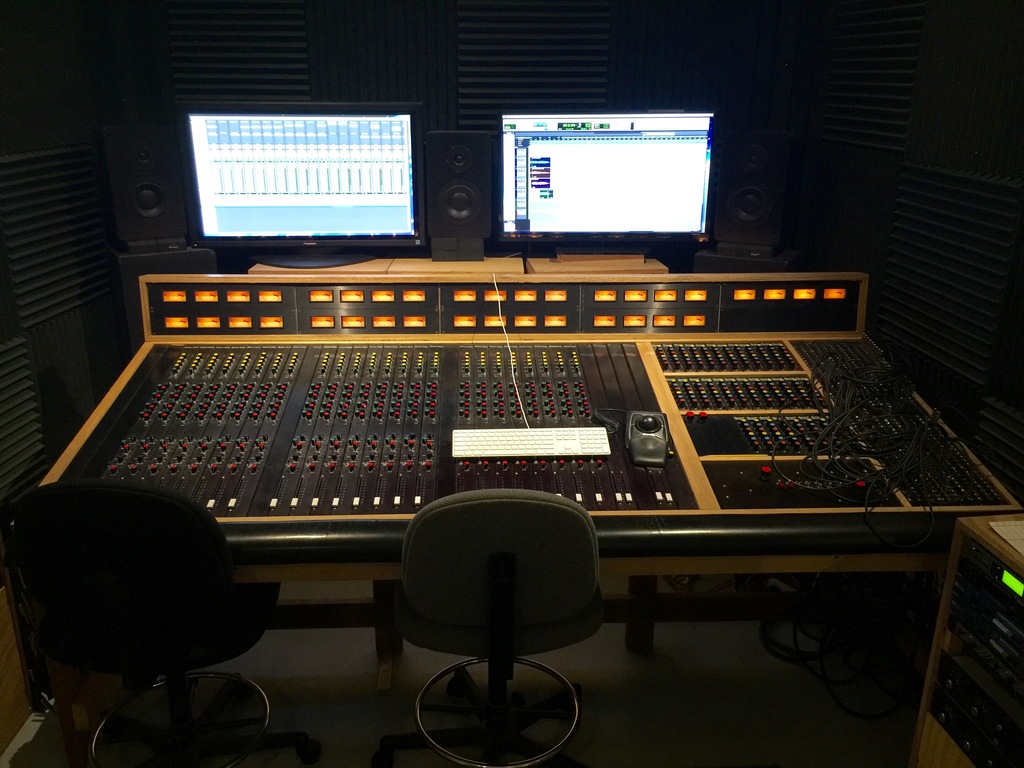 I get  a lot of questions about why i built my own console, how i designed it, whats under the hood....well here goes.

It all began at Desert Sound where i did extensive  modifications to the studios  Model 10 console.  I had reached the limit of what could be done and began thinking about starting from scratch with a new design.  Around the same time Tangent, a local  Tempe company that built consoles,  went out of business.  i approached  the owner about buying some of his inventory.  I bought a lot of faders and pots thinking i would build a new console but could never get the time to do it being busy with sessions and such. After closing the studio in the late 80's i went to work at Advanced System Inc and had time in the evenings to work on the design.  I had the advantage that to company had a lab the could process circuit boards.

The first thing i built was the monitor mixer which was very basic and good warm up for things to come.  It has volume, pan and a reverb sent for the control room and the studio with control room section having a solo function.

The main console is line in only [all mic preamps are out board] with +&- 24 volt rails for high headroom and is direct coupled as much as possible.  The line input is transformer coupled with a Jensen JT-11p feeding differential input [the transformers were added later..inputs were originally active].  the next section is the equalizer which is a fully parametric design which has a feature that keeps the output constant regardless of Q setting.   in hindsight I would have I would have done a switchable Baxandall equalizer since i dont use the Q function much.  The eq's are capacitor coupled since the parametric design is built around a pair of inverting integrators with very high gain at the lowest frequencies amplifying offset voltages. The use of quad amps in the circuit doesn't help either.  I have a future mod that will change the amps to duals with much lower offsets.  The eq circuits drives and inverting amp that drives the dynamics section.  In the 80's when i was dreaming up the design I came across an article in Studio Sound by Ben Duncan.  He did  shoot out of various VCA's [June, July, August and September 1989 Studio Sound].  He concluded that the best over all VCA was the Aphex 1001. When I approached Aphex to buy some for my new board they said the part was proprietary and would not sell to me.  Not to be deterred I called EAR to see if they could persuade them.  In the end I got the chips with a promise  i would not build and sell any stand alone compressors.  One of the great things about the VCA is it's linear control law.  This allows the use of classic side chain circuits.  The final design uses a back bias for the threshold and a dc gain control for the ratio.  This arrangement makes the threshold control a crest factor control meaning at high threshold only peaks are passed to the rectifier.  There are 3 switchable time constants, fast, medium and slow.  There are 4 ports on the VCA side chain for the compressor, expander, solo and automation.  I was originally going automate the board but ProTools cam along and there was no need for it.  The output of the dynamics section feeds the fader followed by a 15DB gain stage which drives the output section.  There are 2 stereo and 8 mono buses plus direct out of every input module.  The summing amps are all John Hardy 990C's.  The summing resistors are 3.32k which low by industry standards but 990's excel at low impedances.  All 24 channels plus effect returns are summed on a single amp with heavy gauge wire forming a star ground to a heavy copper buss bar.  The most recent addition is the meter bridge.  Hairball Audio sold me 36 Urei 1176 style meters.   For years I got by without any metering since ProTools provided them but recently I have had more calls to do analog tape and the machines are behind me...my neck couldn't take it anymore.

When building your own you can use the very best parts and can pick from the best circuit designs.   You don't have to compromise to meet a price point, or mass manufacturing limitations.  It was a lot of work...took years...but i would do it again